A PHP Error was encountered

Message: count(): Parameter must be an array or an object that implements Countable

Set in 2100 acres of gardens and parkland, Blenheim Palace is the only non-Episcopal country house in England to be given the title of 'palace.'

Famous as the birthplace and family seat of Winston Churchill, the palace was given UNESCO World Heritage Site status in 1987 and Blenheim's intriguing history, imposing baroque exterior and gardens designed by Capability Brown continue to attract thousands of visitors each year.

The palace, which is situated in the village of Woodstock in Oxfordshire, was built for John Churchill, first Duke of Marlborough, in recognition of his great military achievements. He joined the army in 1667 and gained his reputation in the wars of the Spanish Succession. In 1704 he defeated the forces of Loius XIV during an important battle that took place in a small village called Blindheim, or Blenheim, on the banks of the River Danube. John Churchill, who came from a family that, while gentry, was not aristocracy, became a national hero, credited with saving Europe from French domination. He was made the first Duke of Marlborough and given the royal manor of Woodstock by Queen Anne, while her parliament promised a substantial amount of money to enable him to build a house fit for a hero.

The manor of Woodstock was already somewhat infamous. Henry II housed his mistress Rosamund Clifford, 'fair Rosamund' here, in a 'bower and labyrinth' and there is still a spring in the grounds where she is said to have bathed. Elizabeth I was imprisoned here for a year in 1554, in a tumbledown gatehouse, by her suspicious sister Mary. What remained of a ruined Medieval palace was bombarded and destroyed by Cromwell's troops during the Civil War.

Churchill surprised everyone, including his wife, Sarah Jennings, by hiring, not Christopher Wren but the popular dramatist and untrained architect Sir John Vanbrugh to oversee the design. Sarah was against the decision from the start and criticised Vanbrugh at every turn, accusing him of gross extravagance and impracticality. Tensions were rife, and as relations between the Marlboroughs and Queen Anne deteriorated and the promised money never materialised, a crisis of great proportions developed. The Marlboroughs were forced into exile with £45,000 owed to contractors, the palace half-built and Vanbrugh's reputation in shreds.

The Duke and Duchess returned to England on the day after the Queen's death in 1714, determined to complete the project with their own money. Vanbrugh was banned from the site by Sarah and the architect Nicholas Hawksmoor brought in to replace him. Relations between the former architect and his clients were so damaged that Vanburgh was even refused admission when he tried to visit his creation as a member of the viewing public in 1725.

Sadly the first Duke of Marlborough died before his monument was completed. No longer able to sit with his back to a thirty tonne bust of the vanquished Louis XIV in the palace's massive painted saloon, he was interred in a vast tomb in the palace chapel, featuring a depiction of the surrender of Marshall Tallard - the palace is full of such heroic scenes. The Duchess commissioned a sarcophagus for his tomb in 1730, designed by William Kent, in which statues of the Duke and Duchess are shown as Caesar and Caesarina. The 67 foot high ceiling in the great hall, which leads into the saloon and was painted in 1716 by Thornhill shows the Duke kneeling to Brittania and proffering a map of the Battle of Blenheim. 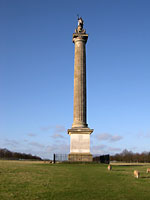 The palace architecture continues to be viewed with ambiguity by many, who consider the brief period of English baroque, so loved by Vanbrugh, to be ugly and incongruous. Blenheim was planned in perspective, best viewed from a distance, and less as a home than as a national monument, which was one of the things that alienated Sarah from the design. The architect was told to create something that would reflect the power and civilisation of the nation and he chose the severe form of baroque, using great masses of stone to imply strength. Vanbrugh was keen on the idea of creating a castle-like atmosphere and the central block of the building is crowned with a low tower at each corner, topped by vast belvedenes of stone. In the gardens a huge Column of Victory, 134 feet high, terminates a great avenue of elms that lead to the palace, planted in the positions of Marlborough's troops at the battle of Blenheim.

It took centuries for Blenheim to achieve the graciousness it was intended to embody. The gardens in particular were ridiculed, dominated by a huge and ugly bridge designed by Vanbrugh and said to contain thirty rooms. Alexander Pope wrote satirically about it: 'The minnows, as under this vast arch they pass/murmur, how like whales we look, thanks to your grace.'

It was the fourth Duke of Marlborough who was responsible for the beauty we see at Blenheim today. He employed Capability Brown to re-design the gardens in 1764 and Brown immediately began a scheme to return the landscape to a state of naturalness, planting trees and creating man-made undulations. He made a great lake by damming the River Glyme, and, in what was probably his greatest achievement, managed to flood the vast bridge, submerging the lower rooms beneath water level and reducing the incongruous height.

The Marlboroughs continued to inhabit the palace for many centuries, but they were beset by financial troubles. The first Duke, never receiving the money promised by Queen Anne, spent virtually everything he had on the building work. Subsequent Dukes struggled to maintain the lifestyle their illustrious ancestor had created for them, and by the 19th century the family was on the brink of bankruptcy. A special act of parliament was passed, the Blenheim Settled Estates Act of 1880, to allow the sale of precious books and art from the palace, but it was not enough. When the ninth Duke inherited in 1892 drastic measures were called for. Prevented from earning money by the social mores of the time the Duke had only one option, to marry it, and in November 1896 a wedding took place between him and the American beauty and railroad heiress, Consuelo Vanderbilt. Consuelo claimed she was locked in her room by her mother, who was desperate for her daughter to be a Duchess, until she agreed to a marriage that would cost her father $250 000, around £25 million in today's currency.

Legend has it that Marlborough told Consuelo in the carriage as they left the church that he loved somebody else and would never return to America, hating everything that was not British. Consuelo was duly unhappy and eventually divorced her husband, scandalising society, but not until Marlborough had completed an extensive restoration project with his wife's money, including hiring the French architect, Achille Duchene, to create the celebrated water garden. The ninth Duke turned Blenheim into the glorious status symbol it was always intended to be. He employed a hundred staff, including a cricket professional to make sure of the success and honour of the estate cricket team.

Blenheim Palace remains the home of the Dukes of Marlborough today, with John George Vanderbilt Spencer Churchill, the eleventh Duke of Marlborough, occupying the same suite of rooms as the first Duke and Duchess. The palace and gardens are open to the public ten months of the year while the park is open year-round. Guided tours of the state rooms are available and a new visitor experience, the 'untold story' uses animation and video to delve deeper into the palace's history. The old kitchen gardens feature a huge maze, a butterfly house and an adventure playground, linked to the palace by a mini train. The palace is regularly hired for conferences and in 2008 the park hosted Wakestock, Britain's only music and wakeboarding festival.

A number of films have been shot on location here including Indiana Jones and the Last Crusade, The Avengers, Entrapment, Kenneth Branagh's Hamlet and Harry Potter and the Order of the Phoenix. The life and times of Winston Churchill are commemorated in a permanent exhibition in the suite of rooms in which he was born.

Show all attractions
back to top