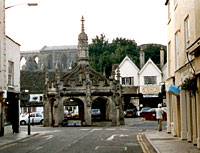 Malmesbury, on the southern edge of the Cotswolds is widely known as the oldest borough in England. It was given its charter by Alfred the Great in 880 AD. Recent excavations, however, have uncovered wall defences that date from the Iron Age (between 800 and 500 BC). This means that Malmesbury is also arguably the oldest continually inhabited town in England.

The town probably owes its long history to its unique geography. Built on the top of a hill with steep cliff-like sides three of which are surrounded by water, Sir William Waller named it the best naturally-defended inland location he'd ever seen. Add to that the numerous freshwater springs that bubble up on the hill's south-facing slopes and you have a near-perfect settlement location.

Since the 7th century the freshwater springs have been regarded as holy wells, and one of the springs is named Daniel's Well after a ninth century monk called Daniel. He is said to have submerged himself in the freezing cold water every day in order to quell fiery passions.

Daniel would have been part of a community of monks living and working at Malmesbury Abbey, which dominated the town from early Saxon times to the sixteenth century. The Abbey was a centre of learning and pilgrimage and once had a spire taller than Salisbury Cathedral. What can be seen today is the third Abbey built on the same site, although most of this was destroyed by a storm in the late fifteenth century. What remained was sold by Henry VIII to William Stumpe, a clothier, during the dissolution. The little that remains of the Abbey today includes a parvise that still holds well-preserved examples of books from the Abbey's library. The Abbey is now used as the parish church.

The first Abbot of Malmesbury Abbey was St Aldhelm, patron saint of Wessex, but it was Eilmer 'the flying monk' who has ensured its continued presence in the pages of our history books. William of Malmesbury, a contemporary of Eilmar's writing in 1125, gives an account of his fabulous attempt to be the first person ever to fly.
'He was a man learned for those times of ripe old age and in his youth had hazarded a deed of remarkable boldness. He had by some means, I scarcely know what, fastened wings to his hands and feet so that, mistaking fable for truth, he might fly like Daedalus, and, collecting the breeze upon the summit of the tower, flew for more than a furlong (210 metres). But, agitated by the violence of the wind and the swirling of air, as well as by the awareness of his rash attempt, he fell, broke both his legs, and was lame ever after.'
In spite of rendering himself lame, Eilmer, who has sometimes been called Oliver, began straightaway to prepare for another flight. He was convinced that the addition of a tail to his flying gear would make all the difference. The Abbot himself had to step in and forbid Eilmer to risk his life in further experiments.

In the 1920s a stained glass window was installed in the church showing Eilmer dressed in blue monk's habit and holding a pair of wings in his hands while a lane off the present-day high street, called 'Oliver's lane', is said to mark the site of his landing.

Connected to the Abbey and thought to have been the home of the Abbot is the Abbey House Gardens. The house dates from the thirteenth century, although there is evidence of a home existing there since the eleventh century. The house was sold along with the Abbey to William Stumpe who re-built it on its original foundations and handed it down through his family until the early twentieth century. It was sold to Captain Eliot McKirdy who enlarged it but kept the same exterior style. From the late sixties it was a convent and retreat owned by the Deaconess Community of St Andrew's until in 1994 this grade one listed building set in five acres of gardens was bought by Ian and Barbara Pollard. The Pollards transformed the gardens and opened them to the public in 1996. In 2002 the gardens rose to fame after being praised by Alan Titchmarsh who featured it on his programme 'Gardener's World'. In August 2005 the Pollards, who are both keen naturists, cemented the garden's notoriety by hosting the first 'Clothes Optional Day' at a major inland British tourist attraction. The day was a roaring success and the couple are now known as the Naked Gardeners.

Malmesbury Abbey final claim to fame is as the resting place of Atheston, grandson of Alfred the Great, who is said to have been buried there in 939AD. During the Battle of Brunanburh in 937 Atheston beat an army of northern English and Scots and made a claim to become the first king of all England. Legend has it that the Malmesbury Commoners descend from the men of the village who helped Athelston to victory. The story goes that Athelston gave the townsfolk their freedom and six hundred hides of land to the south of the town in gratitude for their support. The status of freemen was passed down through the generations and remains in place today. A maximum of 280 commoners, who permitted women to number amongst them only in 2000, still own land to the south of the town and dozens of properties including pubs and shops in the town itself, much of which they use to provide affordable housing for locals. 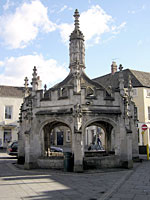 Malmesbury, which lies on the main Bristol to Oxford route, was of strategic importance during the English Civil War. It was fiercely fought over and is said to have changed hands seven times. The south face of the Abbey still bears marks from cannon fodder and gunshots.

Today's town centre, often bustling with tourists, is characterised by a fifteenth century market cross, one of the best-preserved of its kind in the country. The cross, which was described by John Leland in the 1540s as 'a right costly piece of work', is nick-named 'The Birdcage' because of its elaborately carved octagonal structure.