Castle Combe, with a population of around three hundred and fifty, is often called 'the prettiest village in England'. Situated in a conservation area on the southernmost edge of the Cotswolds and just twelve miles from Bath, this hidden gem has been welcoming visitors for at least a century.

The village takes its name from an adjacent wooded hill, which was fortified by Britons before being occupied by the Romans because of its proximity to the Fosse Way, an important Roman road linking Exeter and Lincoln. After the Romans came the Normans, who built the fort into a castle, of which little now remains except earthworks. 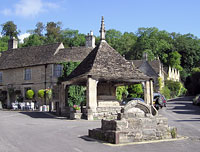 By the Middle Ages Castle Combe, along with much of the Cotswolds, enjoyed a prosperity based on sheep and wool. Numerous weavers' cottages were erected from local stone to house the workers, and many of remain enticingly picturesque today. A fourteenth century market cross, situated where three main streets converge and with an old water pump beside it also bears testament to the Castle Combe’s industrious history. The cross was erected when the village was deemed prosperous enough to be allowed to have a weekly fair where sheep and wool were traded, and the village became known for manufacturing a red and white cloth known as 'Castlecombe'.

The church of St Andrew’s dates from medieval times and contains the tomb of Walter de Dunstaville (1270), whose family owned the castle after the Norman Conquest. A carved effigy shows him in full chain armour with angels at his head and a dog at his feet.

The Scrope family moved in as lords of the manor during the reign of Richard the second and remained in place for nearly five hundred years. The original fourteenth century Manor house, together with later additions, has now been turned into the four star Castle Combe Manor House Hotel, boasting forty-eight bedrooms and three hundred and sixty five acres of gardens.

The village also boasts a racetrack, which occupies the site of a former world war two airfield, decommissioned in 1948. The racetrack was opened in 1950 and in its heyday attracted star names such as Stirling Moss ('the greatest driver never to win the world championships') and John Surtees (the only person to have won world championships on both two and four wheels.) In 1997 Nigel Greensall established a new lap record of 130.93 miles per hour, but he was to remain unchallenged due to a tragic accident involving the death of spectator. This forced the track's owners to install chicanes to slow the cars down. Formula three returned to the track in 2001 but in 2005 it was issued with a noise nuisance order. This was to spell the end of all but local championships, which continue today, together with a yearly Formula Ford Carnival.

Despite the village’s fascinating history it will probably be remembered most of all for the part it played in the 1966 film of Doctor Doolittle, starring Rex Harrison and Anthonu Newley. TV aerials were removed and a jetty built on the banks of the By Brook in order to temporarily turn the village into a sea port.