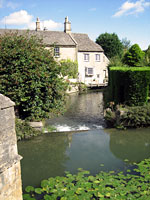 Just twenty miles west of Oxford, Burford is often referred to as the 'gateway to the Cotswolds'. A broad main street slopes gently from the High Wolds, with great views of the open countryside, to a narrow, three-arched medieval bridge which crosses the River Windrush.

The village, whose Anglo-Saxon name means fortified hill town with a ford, was the site of a battle between the armies of Wessex and Murcia in 762. After the Norman Conquest it was given to the Bishop of Bayeux, William the Conqueror's brother, and in 1087 it was granted its first market charter.

Burford lies on important trading routes and it flourished as a market town, particularly between the 14th and 17th centuries when, like many towns in the Cotswolds, it was an important centre for the wool trade.

The legacy of this industry continues to give the town its unique character today. In the middle of the main streets lies 'The Tolsey', a landmark building with an open ground floor and half-timbered first floor that dates from the 16th century. Formerly the place where wealthy wool merchants held meetings and collected tolls, the building is now home to the Tolsey Museum.

The Church of St John the Baptist also benefited from money made by the wool merchants. Originally Norman, it was added to during the years of prosperity to become one of the largest parish churches in Oxfordshire, with an imposing grandeur more reminiscent of a cathedral. The church was the scene of bloodshed during the English Civil War when, in 1649, it witnessed a historic battle between troops from Oliver Cromwell's army and the Levellers, mutineers rebelling against authoritarian rule. Three hundred and forty Levellers were kept prisoner in the church for several days until three were shot. Carvings made by the prisoners and bullet holes left by the executions can still be seen today.

Houses such as Falkland Hall, home of local cloth and wool merchant Edmund Sylvester, Symon Wysdom's cottages, built in 1762 by another wealthy merchant and the Burford Priory, also bear testimony to the town's prosperous past.

The Burford Priory, now housing a community of Anglican monks and nuns, was at one time the home of William Lenthall, who bought the estate in 1637. William Lenthall was a speaker in the House of Commons and famous for defying Charles the First. The house and chapel, both fine examples of Jacobean domestic architecture, were restored by architect Walter Godfrey in the 19th century for the philanthropist E.J.Hornimen.

Today the town attracts many visitors each year and numerous hotels, pubs and restaurants line its picturesque streets, where the ancient stone buildings, some of which date from Tudor times, often lean at a charmingly precarious angle.

The Blue Cross Animal Welfare Charity has its national headquarters in Burford, and the nearby Cotswold Animal Park, set in 160 acres of parkland and gardens around a listed Victorian manor house. The park is home to a fascinating and varied collection of animals, many of whom benefit from the Park's commitment to sharing and exchanging animals with other institutions in order to further breeding programmes of conservational importance.